Concerts in the Dark: The Paperboys 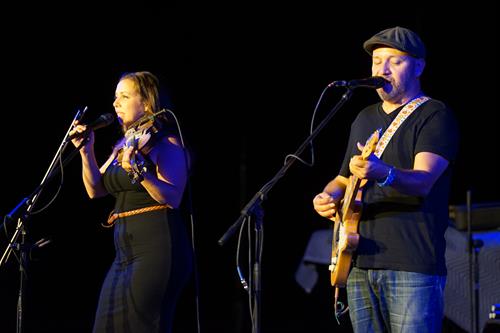 Event Description:
THE VASHON PARK DISTRICT PRESENTS:
“CONCERTS IN THE DARK”
THE PAPERBOYS

The Vashon Park District is proud to present our first ever Concert in the Dark! Join us at the Vashon Theater on Thursday, December 12th at 8:00 pm as we continue to expand our recreational programming by welcoming back one of the island’s favorite folk rock bands - the Paperboys. Just like Concerts in the Park, Concerts in the Dark is a free event. Seating will be limited so it’s first-come, first-serve. We hope to make this part of a winter series so stay tuned for news about additional VPD sponsored shows.

For a quarter century, The Paperboys have been touring the world and lighting up stages with their freewheeling blend of influences from Celtic and bluegrass, to Mexican son jarocho, brass bands, and Canadian roots. They have been called everything from Cajun slamgrass to worldbeat, they’ve received a Juno award (Canadian Grammy), plus two Juno nominations, two West Coast Music Awards, released nine albums, and regularly play two-night bills in the Pacific Northwest. But that’s not what matters to Tom Landa now. “What means more to me than anything else is to receive letters, emails, or hear stories from people who tell me that our songs helped them through a tough time, or that they used one of our songs for their wedding, or that an album of ours was the soundtrack of their summer. At the end of the day, accolades are nice, but they are nothing compared to connecting with people.” Landa’s song ‘Better Than The Last’ has become somewhat of an anthem for people who have gone through hard times.

It’s a remarkably grounded perspective from a bandleader who’s been through it all (including the passing of a band member). But Landa’s an open-book kind of songwriter, a Canadian grassroots poet who loves to infuse his songs with exotic world rhythms, Celtic melodies and pop hooks. What’s remarkable about the band, is their ability to seamlessly fuse all the different styles and make it sounds like they come from the same place. Their latest CD, ‘ Score’ is full of these signature sounds: Spanish language songs that reflect Landa’s Mexican heritage, explosive brass lines from their extended 8-piece ensemble, Celtic fiddle and pennywhistle blazing through an old reel, English Language rock songs with strong pop influences, and a kind of melting pot sound that reflects not only the diversity of the band’s home city, Vancouver, BC, but also a larger vision of what modern Canadian roots music should sound like.

The Paperboys were formed in 1992 when Landa first moved to Vancouver. “As a teen living in Ontario,” he explains, “I was really influenced by the music coming out of Vancouver in the late eighties/early nineties. Bands like The Grapes of Wrath, 54-40, Roots Round Up and Spirit of the West, who were by far my biggest influence. I packed my bags and came to Vancouver solely based on the music scene.”

Over time, The Paperboys were a key part of multiple waves of popular Canadian folk-rock bands that included The Duhks, Ashley MacIsaac, Leahy, and Great Big Sea. “One big difference between Canadian Celtic artists from the east coast and Celtic bands in other parts of the world,” says Landa, “is that we don’t have the same approach to playing music, and we are not flame-keepers in preserving tradition, so we are free to mess around with it and create something different. We still have deep respect for the tradition, but we are a product of where we are from and the multicultural city we call home.”

Although the Paperboys have made critically acclaimed records, they are through and through a live act. They shine most on stage. They have spent the last 25 years on the road playing all over North America and Europe, where they have developed a large following without the aid of a record labels or radio play. They have become a festival favorite, and have played at Bumbershoot, Vancouver Folk Fest, Edmonton Folk Festival, Tonder Festival, Folk Im Schloss, Trowbridge, Warwick Folk Festival, The Queen Elizabeth Theatre and The Kennedy Centre to name a few.

Tom and the band have always had a DIY approach to their career and have been very successful at it. They have formed their own label, their own management and booking agency, created their own festivals, and forged their own path. They’ve ensured that they keep a connection to their fans, and their fans have always loved and supported them through every album, every line-up change and through every adventure. Their success predates ‘internet fame’ and careers modeled after Hollywood singing contests. With that said, they have hundreds of thousands of video views, a strong social media following and a great web presence. One look at their Facebook page is indicative of the connection they have to their fan base.

Their latest CD, Score brings together all the familiar sounds of The Paperboys. There is the pro-immigration song ‘America’, which is set to a ska rhythm and mariachi horns, or the Country- Folk anthem ‘California’ which is a favorite sing-along song at their shows. The Paul Simon-esque ‘Rain On Me’ is full of infectious horns, including a blazing solo by trumpeter Miguelito Valdes (Afro Cuban All Stars). ‘White Noise Lullaby’ is a song about tinnitus (that ringing in your ears), which affects two members of the band. ‘La Primavera’ is sung in Spanish and fuses Mexican Son Huasteco rhythms with Irish jigs. The Folk Pop ballad ‘Fall Down With You’ is a duet between Tom and Kendel Carson (Alan Doyle, Chip Taylor) which currently has 142,000 views on YouTube. The Americana twang of ‘Omak Hotel’ and ‘Dilapidated Beauty’ showcases the band’s love for the genre. Bluegrass fans will love ‘Country Life’ with its banjo driven rhythms and lovely harmonies. The New Orleans tinged ‘Toenail Moon’ is a turn it up to 10 dance hit with second line horns and drums.

Providing sound for this very special concert will be Bandstand Music.

If you were there at the August 29th Concert in the Park show at the Open Space for Arts and Community, you know how wonderful that show was. Don’t miss this one!
Event Media:
Location:
The Vashon Theatre
Date/Time Information:
Thursday, Dec 12th
Contact Information:
pete@vashonevents.org
Send an Email
Fees/Admission:
Free.
Set a Reminder: