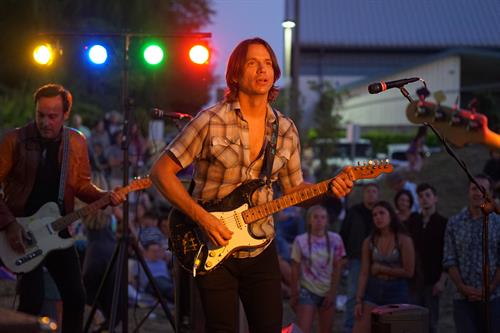 Vashon Events and the Vashon Park District have announced the lineup for the annual Summer Concerts in the Park. The extremely popular and free outdoor concert series will begin on Thursday, August 1st and run through Thursday, August 29th. All concerts start at 7:00pm and are held in Ober Park on Vashon Island. Enjoy live music performances from today's top talent in Rock, Roots Reggae, Big Band, High Energy Folk and Cajun Slamgrass performing against one of Vashon's most beautiful outdoor backdrops.
Bring the family!  There's plenty of grass and natural berms to spread out those picnic blankets and enjoy some wonderful music on a warm summer night.  Families can come relax, let the kids play on the playground and enjoy the entertainment at these summer events.

The Concerts in the Park series is presented by the Vashon Park District.

The concert series is curated by Vashon Events.   We'd also like to thank Open Space for Arts & Community, our in-kind sponsor for Concerts in the Park as our backup venue in case of bad weather!  A big thank you to David Godsey and Janet McAlpin for this insurance plan!  If you've never experienced the warmth of community at the cool nights of summer concerts in the park, you're in for a special treat.

Please remember that there are no dogs allowed at Ober Park. Alcohol and smoking are also not permitted.

Ian Moore, the Seattle-based, Austin, TX-born guitar player, singer and songwriter, has been busy.  Coming on the heels of his most successful record, Strange Days, since his first album, the self-titled Ian Moore LP, and despite a never-ending cycle of touring, Moore offers a new record called “Toronto” of bright, blazing rock-n-roll that combines his legendary guitar prowess with radio-friendly singles.

Meanwhile, he’s founded the artists’ healthcare alliance SMASH (Seattle Musicians Access to Sustainable Healthcare) and has joined the board of NARAS for the Pacific Northwest as governor and head of the advocacy committee.

As always, Ian has his eyes on the challenges faced by musicians of every stripe, having experienced the spectrum of artist successes and tribulations himself over a nearly 30-year career. “It’s a very different climate right now. When we hit a city, it doesn’t matter that I have 14 records, radio hits, etc. The only thing that matters is if we can really show up and leave the people feeling they saw something amazing. It keeps me hungry, and I like the challenge” says Moore.

You might have been surprised to hear Moore’s voice as well popping up on major network shows on prime-time television this past year, after several selections prominently being featured as performances on both American Idol and The Voice (“Satisfied” and “Blue Sky”).

Moore’s story is often told and probably familiar to most critics; his initial record on Capricorn propelled him to national tours with the Rolling Stones, ZZ Top and Bob Dylan, acting in the acclaimed indie feature “Sling Blade,” and having Ice Cube direct the video for his track “Harlem.”

Moore deviated from his initial blues-oriented guitar sound on subsequent records, touching on graceful pop songs to psychedelia, to British pub rock and deep Americana. The Toronto record and its 6 tracks represents those influences in such a way that they have informed his songwriting but is likely more recognizable as a strong collection of the kind of guitar rock his core fanbase would respond to immediately.

New discoveries of Moore’s live shows and last few records are coming on board every day, as his live shows have graduated once again from barrooms to bigger stages and warmer rooms, despite a blustery big stage headlining appearance this past New Year’s Eve at Auditorium Shores in Austin. Moore delivered in gloves and muffler, despite snow and 27 degrees (In Texas!)