Run for Unofficial Mayor of Vashon

Have you dreamed about being an elected official? Here is your chance to become the Official Unofficial Mayor of Vashon Island AND support your favorite Island non-profit organization at the same time!

Anyone can enter and run for the office! The election is open to any Vashon Island resident regardless of age, race, gender, orientation, hair color, shoe size, like or dislike of Marmite, corporeality, or species!

In order to throw your hat in the ring you must first announce you are running for office to the Chamber of Commerce and agree to the rules of the election. Declare which Island charity you want to represent, get written permission from the non-profit organization fundraise in their name, then announce your candidacy with a Press Release on the Chamber website! Create and place up to 12 ballot boxes, organize your fund raisers and get out there and raise money... we mean "votes".

Your supporters can vote (as many times as they like) by depositing a dollar (or more) in the ballot box, writing checks or donating online. Each dollar collected for your charity counts as one vote with the winner earning the title of Vashon Island’s Unofficial Mayor.  All money goes to benefit non-profits on the Island. Money, and proof of payment are collected and sent to the Chamber of Commerce for counting and verifying.  The Mayor’s race has been known to raise up to $22,000 to benefit Island causes.

IF YOU WIN! You will be invited to participate in other events throughout the year, such as the Ribbon Untying Ceremonies and Chamber Events but participation is totally optional. Once elected, the fun starts…all year.!  (Just a word of caution, the Unofficial Mayor is an honorary position and is limited by what you are willing to do once you win the election.) If you don't win, your non profit still wins because you raised money for them.

The election is open to any Vashon Island resident regardless of age, race, gender, identity, corporeality or species. Candidates may run under assumed names, nom-d’ plumes, character names, nicknames, random numbers, or their government names.

In order to run for Unofficial Mayor Candidates must do the following:

Winning the Election:
Distributing Funds: Chamber of Commerce provides each Charity with an accounting of funds collected and issues a check to the Charity by the end of July. 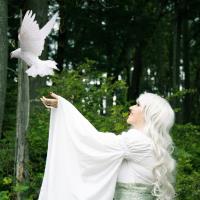